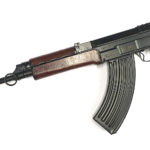 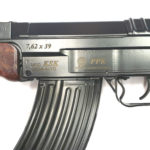 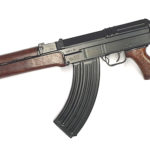 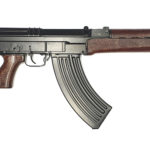 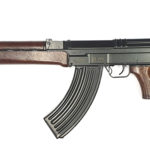 The KSK is a copy of the CZ SA Vz.58 rifle, manufactured by the Czech Republic company PPK.

The SA Vz. 58  is a 7.62×39mm semi-automatic rifle designed in 1956 and manufactured from 1959 till 1984 in Czechoslovakia, and fielded by the armed forces of Czechoslovakia, Cuba and several Asian and African nations.

It was Czechoslovakia’s solution to the requirement for a new military rifle that would use the Warsaw Pact standardized military caliber (for assault rifles) of 7.62 x 39mm.
While externally the SA Vz. 58 resembles the Soviet AK-47, it is a different design based on a short-stroke gas piston and shares no parts with Kalashnikov rifles, including the magazine.

One important functional difference between the Vz. 58 and the AK-47 is that it has a bolt hold-open function, and will also lock the bolt back/open when the magazine runs dry.

The KSK is a copy of the SA Vz. 58 V variant with the metal side-folding stock intended for vehicle crew and airborne units.

This gun is in new, unused condition.
Includes 1 x 30 round magazine.

This firearm is suitable for armed security work, particularly in rural or harsh environments like for anti-poaching work.
It is also suitable for vehicle work due to its high ammunition capacity, light weight and folding stock.