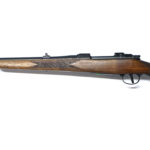 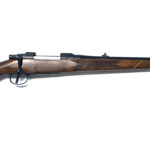 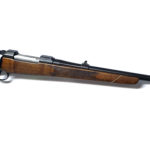 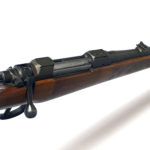 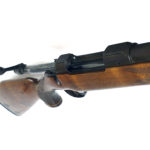 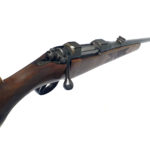 Brno Rifles is a high end line of fixed breach firearms from the historic arms manufacturing plant in Brno, Czech Republic, founded in 1918.
Previously part of the Viennese Arsenal under the Austro-Hungarian Empire, the plant began production making Mauser and Mannlicher rifles.
In 2008 Brno rifles became a subsidiary company of Česká zbrojovka a.s. (CZ) and in 2010 the company was renamed to ZBROJOVKA BRNO, s.r.o.

The BRNO ZKK 600 is a bolt-action rifle with a Mauser style action, and is very popular among hunters and PHs in Europe and Africa, due to its durability, reliability, price and good variety of calibers.
It was later replaced by the CZ 550.
It is available in 3 action lengths, designated by its model number, e.g. the model 601 has a short action which was used for calibers like .223 Rem, .308 Win or .243 Win.
The model 600 is the medium action length, like this particular rifle chambered in .30-06 Springfield, and the model 602 designates the large action for larger calibers.

These rifles are available with a standard profile (curved) trigger, or a straight profile, dual function or set trigger (like this particular rifle).
It is similar in function to a Savage AccuTrigger in that you can push the trigger forward in order to set or engage a hair trigger pull.
To disengage the hair trigger, you simply engage the safety and pull the trigger.
The rifle is set in a checkered Walnut stock with white spacers, and has a 24″ barrel, with flip-up, v-notch iron sights.

This gun is in good, used condition. It is mechanically sound and functional.
The overall finish, which appears to possibly have been refinished (maybe Parkerized), is still very good, with only extremely few, extremely light scratches on the barrel in places.
There is also some very light wear to the back of the bolt and the bolt handle, as well as to the finish of the rear sight.
The wooden stock is still in good condition, with very few light dings and scratches in places, while the recoil pad still looks brand new.
There are no sling swivels.
Fitted with dual function, set trigger.