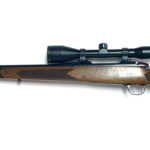 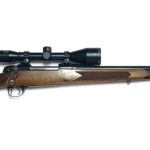 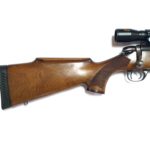 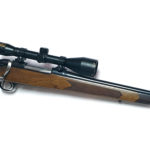 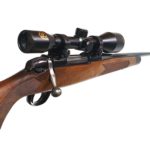 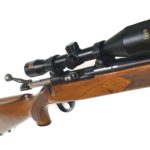 The Birmingham Small Arms Company Limited (BSA) was a major British industrial combine, a group of businesses manufacturing military and sporting firearms, as well as many other products from automobiles, bicycles, to power tools.
Founded in 1861 in Birmingham, England, it was formed by members of the Birmingham Small Arms Trade Association specifically to manufacture guns by machinery.
It was encouraged to do this by the War Office which gave the BSA gunsmiths free access to technical drawings and to the War Office’s Board of Ordnance’s Royal Small Arms Factory factory at Enfield.
During its operational period BSA designed and manufactured many sporting and hunting, bolt-action and semi-automatic rifles, shotguns and air rifles in various calibers.
The company eventually went defunct in 1973.

This particular BSA rifle (unknown model) is a bolt-action, small-game and vermin hunting rifle chambered in .222 Remington.
It features a dual function or set trigger, whereby pushing the lever in front of the trigger forward activates a hair-trigger with an extremely light pull.
It is fitted with Gold Crown 6×42 scope.

This gun is in very good, used condition. It is mechanically sound and functional.
The finish on the barrel is good to very good, with only very few, very light scratches in places.
The front and rear iron sights have been removed, and the tapped holes remain open.
The finish on the receiver is excellent, but there is some slight wear to the bolt handle.
There are some light scratches and wear on the trigger guard, and some light surface rust on the magazine base plate.
The wooden stock is in excellent condition with only the odd, very small and light dent.
It is fitted with Gold Crown 6×42 scope.

This firearm is suitable for large and dangerous game hunting.