The Llama Model III-A is a magazine-fed, single-action, locked-breech, semi-automatic pistol chambered in 9mmK, designed and produced by Llama-Gabilondo of Spain from 1954 to 1997.
It was also known simply as the Llama .380, with some variants also marked as “Especial” or “Super Police”.
It was one of the most successful models in the Llama range.

They were basically miniature copies of Colt 1911 pistols chambered in 9mmK, and with a few, minor aesthetic differences, namely; some models had ventilated sighting ribs long the top of the slides, and the contoured, plastic grip panels.
Early models were also fitted with a lanyard ring.

They used 7 round magazines and included a grip safety as well as manual safety, and were available in a variety of different finishes, with options of different sights and grip styles.
Luxury finishes (including gold plating) and various engraving options were also available. 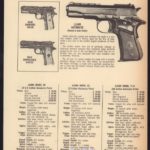 This gun is in fair to good, used condition. It is mechanically sound and functional.
There is some light wear to the front edges of the slide and around the muzzle, as well as some extremely fine wear to the edges of the slide, frame/trigger guard and control parts (including the hammer spur).
There is also the odd, very small, light scratch to the finish in places, but nothing very significant.
There are a few small dents/dings on top of the ventilated slide rib.
The original plastic grip panels are still good with a few light scratches/dings in places.
The action is still very tight.

This firearm is perfect for every-day, concealed or pocket carry.