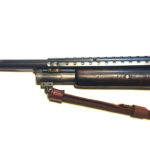 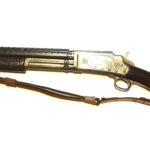 The Marlin Model No. 19 was a slide-action (also known as a trombone action or hammer pump), 12 gauge shotgun produced only between 1906 and 1907.
It was an improved and lightened version of the Marlin Model 1898.

One of the improvements was that the Model No. 19 was given a special two-part matte finish on the topside to help with glare, to address complaints that the previous Marlin shotguns suffered from having too glossy a finish on the top of the barrel.
This was one of the first times that the such feedback for better sporting use translated into changes made at the factory.

Further improvements included internal safety features in the gun’s action, which kept it from going into “false battery” like the previous Marlin pumps.
Lastly, the Model No. 19 was set up to allow for the use of 2 3/4 inch smokeless shells whereas most of the Marlins before it in 12 gauge were 2 1/2 inch black powder guns.

This particular Model No. 19 has been setup as a turn-of-the-century trench-gun, with relatively short barrel, heat-sheild, ammo pouch and sling.

This gun is in very good used condition. It is mechanically sound and functional.
The finish to the barrel is still good with some slight wear around the muzzle and magazine tube.
The receiver is engraved with a scene of ducks flying as well as some scroll designs, and has some slight wear to it.
The wooden forend is a little dented, while the stock is still in very good condition.
Includes a fitted heat shield as well as a leather ammo pouch on the stock and custom-made, M1 Garand-style leather sling.

This firearm is suitable for home self defense.

This shotgun may have some collectors value due to its age and short production run.

* I came across some articles that mentioned that the Marlin Model No. 19 was excluded from use in SASS events, but I am not 100% sure if this applies to this particular shotgun, or if that ruling applies to WSSA.