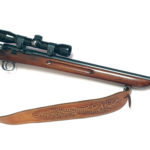 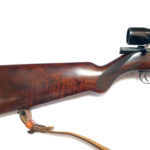 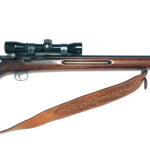 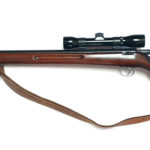 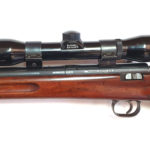 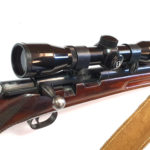 Mauser, originally Königliche Waffen Schmieden, is a German arms manufacturer founded in 1811.
Their line of bolt-action rifles and semi-automatic pistols has been produced since the 1870s for the German armed forces.
In the late 19th and early 20th centuries, Mauser designs were also exported and licensed to many countries which adopted them as military and civilian sporting firearms.

Between the first and second World Wars, during the era of the pre-Nazi Weimar Republic, Germany determined it necessary to produce a large number of training rifles that could be used by both the military and civilians, which would not raise any suspicions or concerns with the Allies of any hostile intentions or military rearming.
Mauser therefore developed and produced a series of single-shot, bolt-action, .22 LR “Sport” and “Target” rifles, that were designed to represent the shape, size, weight and functions of the Mauser G98 military rifle.

The Mauser ES340 falls into this category of .22 LR, bolt-action, training/target rifle, and was produced between 1933-1934.
This was a premier Mauser small bore target rifle and was a favorite of top German military and civilian shooters as it has a short 60 degree bolt lift with the short stroke bolt movement.
It had a 26.5″ barrel and fixed, rear sight (removed on this particular rifle), and the safety lever was located on the left side of the receiver.
A later variation known as the ES340B would include adjustable rear sights, and have a swinging safety lever located at the back of the bolt, similar to that of a conventional Mauser 98 rifle action.

This gun is in very good to excellent used condition. It is mechanically sound and functional.
The finish on the barrel is very good with only very few, extremely light scratches in parts.
The finish on the receiver is excellent, while there is some light wear on the bolt handle and safety lever.
The polished, wooden stock is in excellent condition with only some extremely light dings and shallow scratches.
Includes a fitted Bushnell Banner scope, and ornate, leather sling.

This rifle may also have some collectors value due to its age, make or use as a pre-war training rifle.