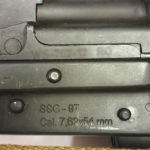 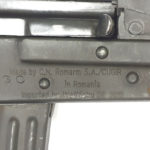 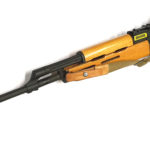 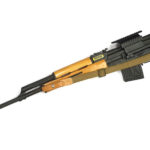 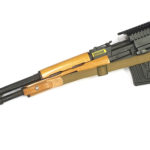 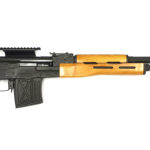 The SSG-97 is a Romanian military designated marksman rifle, also known as the PSL, PSL-54C, Romak III and FPK, first introduced in 1974.
Its appearance is similar to the Soviet Dragunov sniper rifle and its operation is the same long-stroke piston action of the Kalashnikov family of weapons, yet not one single part is interchangeable between the rifles.
The receiver of the SSG-97 is based more on that of the RPK light machines gun
While the SSG-97 is also chambered in the same 7.62 x 54mm cartridge as the Dragunov, their 10 round box magazines are also not interchangeable without some modification.

The SSG-97 rifle’s primary purpose is to be used by a platoon level designated marksman to engage targets at ranges beyond the capabilities of the standard issue carbines.
It has been in service in Romania since the 1970s and is widely sold on the world market.
They are frequently encountered in Iraq where they appear to be quite popular.

SSG-97 rifles have some notable features; the skeleton stock is somewhat similar to the Dragunov’s but includes an interesting corrugated and spring-loaded stamped steel butt-plate. When the rifle is fired this helps reduce the felt recoil to a degree.
The cheek riser on the comb of the stock is angled to benefit the right-handed shooter primarily. Some owners feel the cheek pad is not high enough to adequately attain a rigid cheek weld and have to make do with a chin weld.

The butt stock is much shorter than most Western shooters are used to.
This is because Romanian soldiers active during the Winter often operate in very cold climates and wear thick winter coats while on duty.
In theory, a rubber stock extender is to be fitted during the hot Romanian summer, but one is not issued with the rifle.

This gun is in new, unused condition.
Includes 1 x 10 round magazine and rifle sling.

This firearm is suitable for precision rifle shooting sports.