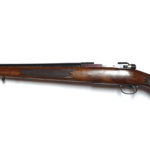 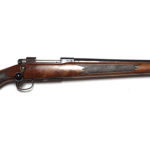 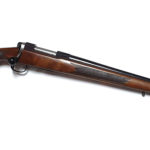 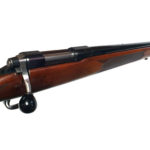 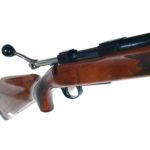 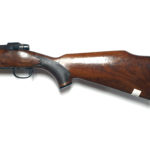 Oy Tikkakoski Ab was a Finnish company founded in 1893, producing firearms and different consumer goods, most notably sewing machines.
Their most known products were sold under the Tikka brand, which was purchased by SAKO in 1983.
The Tikka M55 (originally Tikka M76 and also Tikka LSA55) was the first center-fire rifle action designed by Tikkakoski, and was manufactured from 1968 to 1989.
It was available in many different variants, and chambered in 8 optional calibers ranging in size from .17 Remington to .308 Winchester

The Tikka M55 action is loosely based on the Mauser action, which Tikkakoski wanted to modernize.
The repeating, magazine fed rifle features a milled receiver made from special steel, to which a 90° rotating, two-lug cylindrical bolt locks.
The short action is unable to house larger cartridges than .308 Winchester or eject cases longer than 55 mm.
The bolt handle serves as an extra safety lug, in case the two locking lugs fail.
Later model bolts have a large handle with a plastic ball-shaped end (like this particular rifle).

The trigger mechanism has an adjustable trigger pull between 1 kg and 3 kg. The trigger pull can be adjusted by rotating a screw inside the magazine well.
The receiver has 17 mm dovetail rails milled on its top side for attaching optical sights.

The .243 Winchester (6×52mm) is a popular sporting rifle cartridge, initially designed as a target/varmint round, it can also be used for small game.
The .243 is based on a necked down .308 cartridge case.
It produces a velocity of 2,960 ft/sec with a 100-grain projectile from a 24″ barrel. Commercially loaded .243 ammunition is available with bullet weights ranging from 55 grains up to 115 grains.
It is very popular with target shooters, metallic silhouette, and long range shooters, because of its accuracy and low recoil.

This gun is in good, used condition. It is mechanically sound and functional.
The finish on the barrel and receiver is very good to excellent, with only some extremely light wear on the barrel.
The barrel is threaded for a suppressor or muzzle break.
The action is very clean, and features a large bolt handle with an oversized, plastic end.
The wooden stock is in fair to good condition, with a few light dents and scratches all over, as well as unfilled holes from previous sling swivel positions.
The recoil pad is also a bit old and worn.
This rifle has no iron sights.

Note: If just the stock on this rifle was refinished or replaced, it would be in excellent condition.

This firearm is suitable for hunting small to medium sized game.