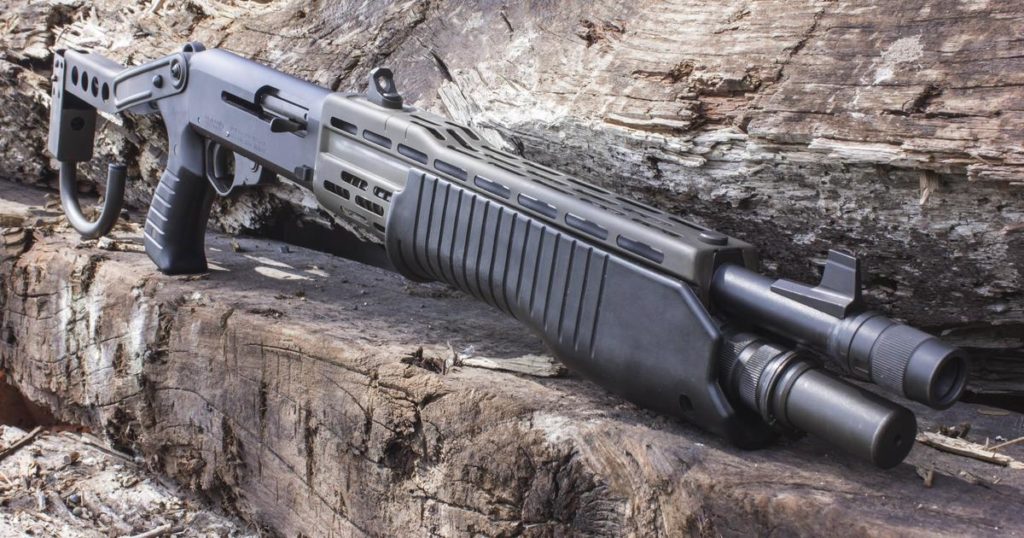 Today very few shotguns, and perhaps long-guns, are as recognisable from their use in movies and video games as the Franchi SPAS-12.

Compared to the conventional, wooden-stocked shotguns of the time, you wouldn’t be faulted for thinking that it was, in fact, a weapon sent from the future to combat killer cyborgs and multi-dimensional monsters.
If this firearm were to be described using only one word, that word would be ‘aggressive’. From the all-black finish, and huge, square heat shield to the sharp, skeletonised folding stock, people took one look at it and just knew that it meant business.
As it turned out, that business was ‘show business’, and is definitely the arena where this shotgun has enjoyed most of its fame.

But the SPAS-12 wasn’t just all looks. It was actually also fairly innovative, as it was designed to operate as both a semi-automatic and a pump-action shotgun, with the cycling method selected by the press of a small button at the bottom of the fore grip.
It was the first shotgun to offer this dual-action feature, and gave it the speed of a semi-automatic, but also the reliability of a manual-loading pump action.

The SPAS-12 was designed and manufactured in 1979 by Franchi of Italy as a rugged shotgun intended for military and police markets. This is clear from the acronym ‘SPAS’, which stands for Special Purpose Automatic Shotgun.
The purpose is also made clear by its dual functionality.

As a semi-automatic, it could be used as a fast-shooting combat shotgun in military applications, while in pump-action mode it could cycle less powerful cartridges like rubber bullets and beanbags, which would usually be used in police and riot-control applications and wouldn’t cycle in a semi-automatic.
The shotgun successfully found customers in both markets, and was adopted and used by various military, police and Special Forces around the world, including SWAT teams in the US. 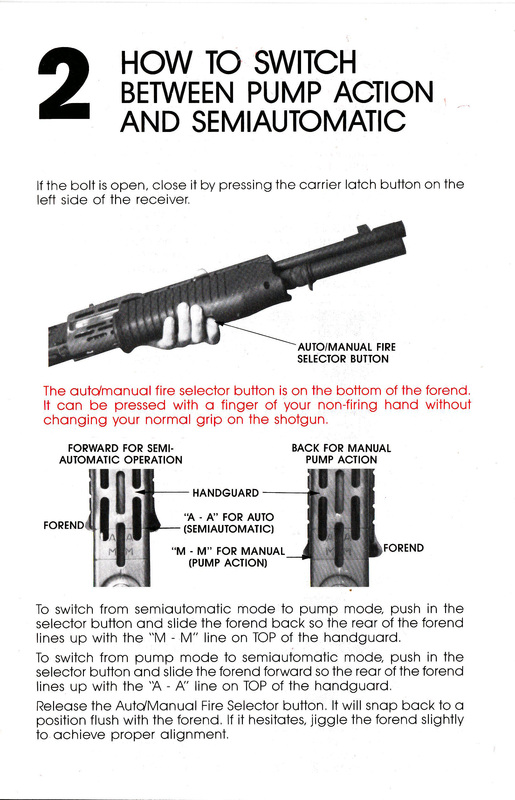 Amusingly, in 1990 Franchi changed the SPAS acronym to Sporting Purposes Automatic Shotgun in an effort to counter import bans and other restrictions imposed on military-purpose firearms, and to offer it to the US civilian market.
This was a little like trying to reclassify a Casspir as a sports-utility vehicle.

Unfortunately for Franchi, this ‘amazing’ piece of marketing trickery didn’t fool anyone, and importation of the SPAS-12 into the US was eventually halted in 1994 under the Federal Assault Weapons Ban.
Production of the Franchi SPAS-12 eventually ended in 2000, but the shotgun had already made a deep mark in the entertainment industry by then, and its legacy would live on as one of the most recognisable firearms of modern times. 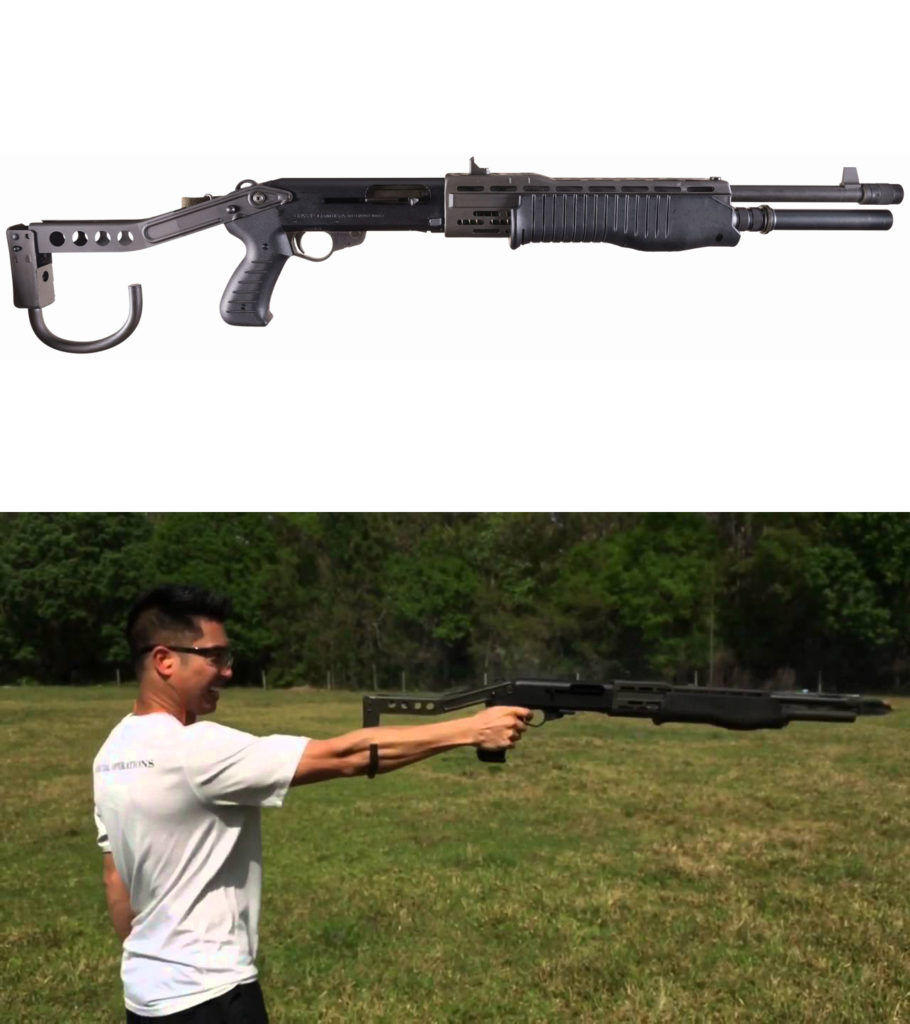 An aspect that definitely aided this worldwide recognition was the SPAS-12’s distinctive design. Its unique design features included a semi-circular metal hook attached to the end of the butt-stock.
This hook could be rotated 90 degrees to the butt-stock in either direction.
Its unusual purpose was to brace under the shooter’s arm and provide extra support for (get this) firing the shotgun one-handed!

This just goes to show what a magical time the 1980s was, when gun manufacturers actually thought that firing a semi-automatic 12 gauge shotgun one-handed was a practical consideration for military and police forces.
Or maybe they just knew that one day the SPAS-12 would be more at home on the screen than in real-life applications, and that firing it one-handed would certainly enhance the cinematic spectacle.

Interestingly, this hook feature was rarely (if ever) seen and used in the movies and on TV shows (as the hook could be removed easily).
However, this notion of firing the SPAS-12 one-handed does lead us to its first appearance on-screen, and it certainly was a notable debut.

If you haven’t already guessed from the time-traveling and killer cyborg references, the year was 1984, and the movie was ‘The Terminator’, the James Cameron blockbuster (and now cinematic classic) which propelled Arnold Schwarzenegger into action-movie superstardom.

In it, the Terminator character simply calls it the ’12-gauge autoloader’ in the scene where he acquires it from a gun store.
The shotgun does get a nice little piece of free marketing when the store clerk points out: “It’s Italian. You can go pump, or auto”, just before the Terminator uses it to blow him away. 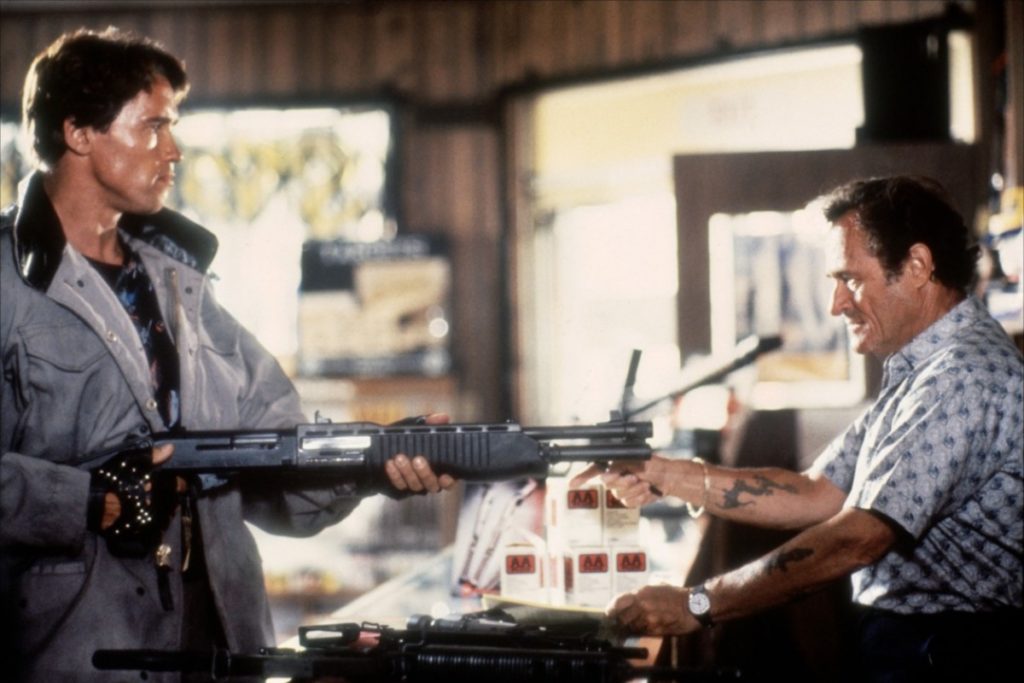 Even though the SPAS-12 has long since been replaced by the military and police forces that adopted it initially (by lighter, more practical shotguns like the Benelli M3 and M4), it is still used regularly on screen to this day, with one of its more recent appearances being on the series ‘The Walking Dead’, used by the popular character Daryl. 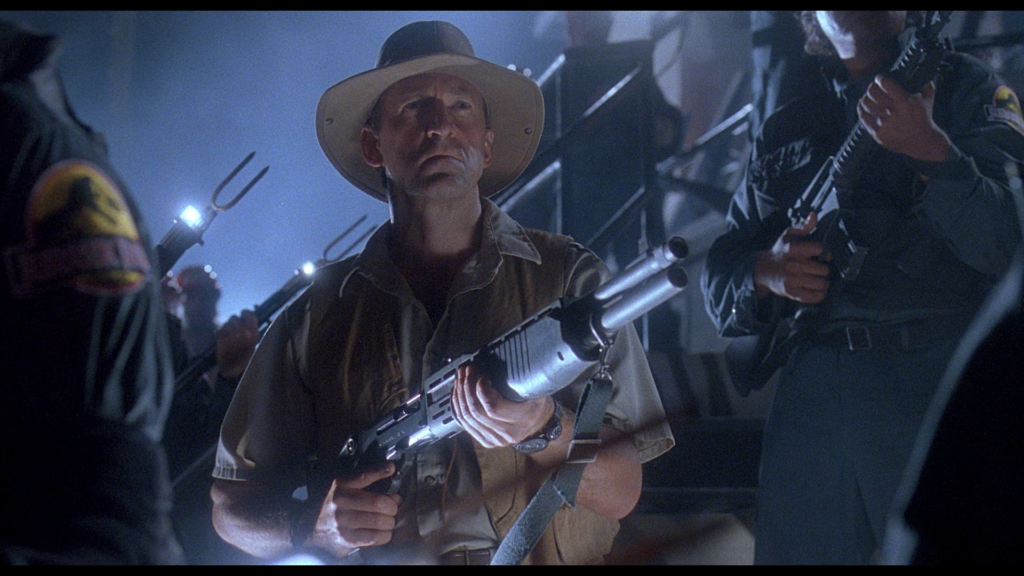 In this well-known scene, after all hell has broken loose, and dinosaurs are running amok around the island, Muldoon decides to hunt and kill one of the deadly velociraptors.

After stalking and spotting his prey, he unfolds the stock of the SPAS-12 carefully, takes a breath and aims … only to be ambushed by another raptor as he resignedly utters his most famous last words: ‘Clever girl!’

In reality, it is almost incomprehensible that an experienced hunter of large and dangerous game would choose a shotgun as his main firearm – and, of all of the shotguns available, one as heavy and ungainly as the Franchi SPAS-12.
Not to mention that, following this illogical choice, he would carry it around a jungle full of deadly dinosaurs with the stock folded. 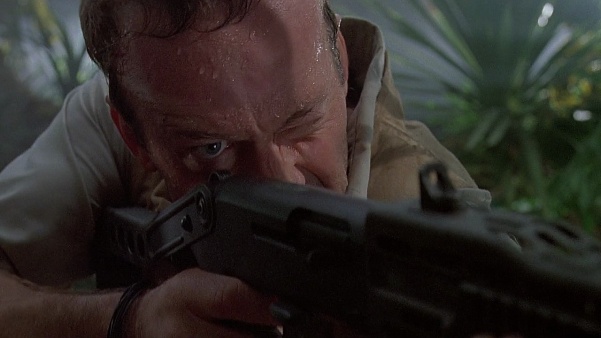 However, this was a movie helmed by the same director who made the world believe you could blow up a giant killer shark by shooting a scuba tank with a rifle, and the audience loved every second of it.

When it comes to imaginary worlds, it is actually not the big nor the small screen where the Franchi SPAS-12 has enjoyed its greatest prominence, but rather the interactive world of video games.
Whereas this form of media may not have had much significance for firearm promotion before the late 1990s, it certainly changed with the explosive growth of the gaming industry in the last two decades.

Video games will certainly be the leading platform by which particular firearms gain recognition and popularity in the future, not only due to it being a growing industry, but also due to the interactive nature of the experience.
With a movie or TV show, a viewer only watches the firearm being used, whereas with a video game, players can use it for themselves, and really get to know the firearm, even if only in a virtual setting. 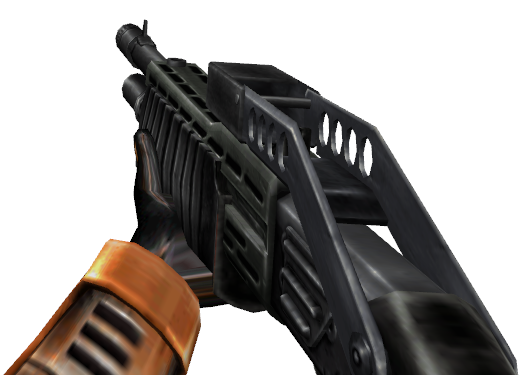 We first got to enjoy wielding the SPAS-12 on our computer screens in 1998 in the ground-breaking first-person shooter ‘Half-Life’.
Even with the limited graphics of the time, the distinctive, square heat shield was fully recognisable, and it soon became a favourite among the gaming generation.

Interestingly, in the game the SPAS-12 was portrayed incorrectly as having dual barrels, and the ability to fire both at the same time.
However, this obvious technical misrepresentation most likely just added even more to its cachet.

Following ‘Half-Life’, the list of successful video game titles and series to include the SPAS-12 in their virtual arsenals is too long to mention in a single article, and if you are part of this gaming generation, you will no doubt be able to recall many of these.
So as long as there are bad guys, monsters or zombies to dispatch in virtual apocalyptic wastelands or far-off planets, the Franchi SPAS-12, the shotgun from the future, and now forever timeless, will be there ready to get the job done. 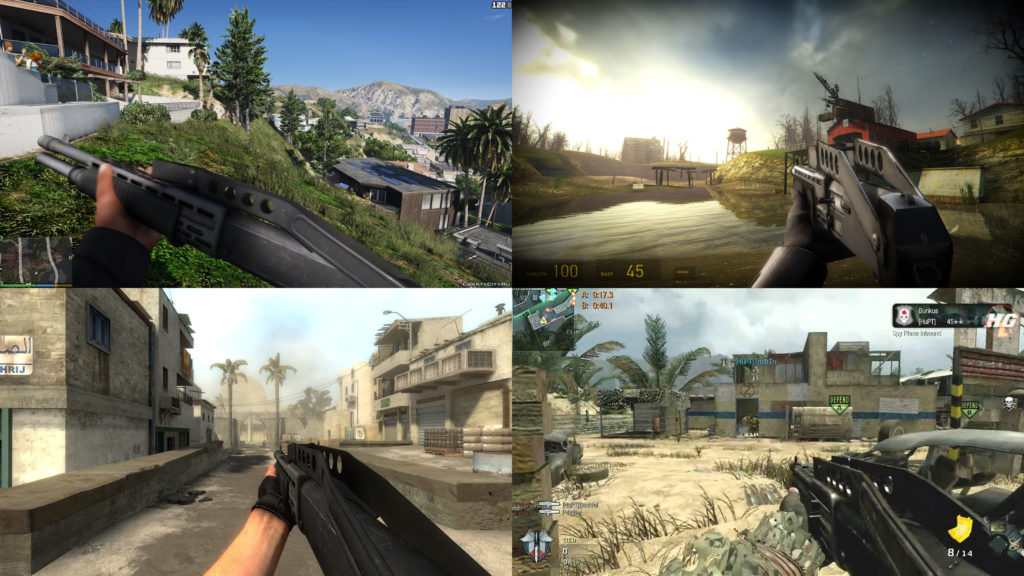 Look out for the next article in this series, 'The Gun That Made The 20s Roar', featuring the Thompson submachine gun, coming soon.