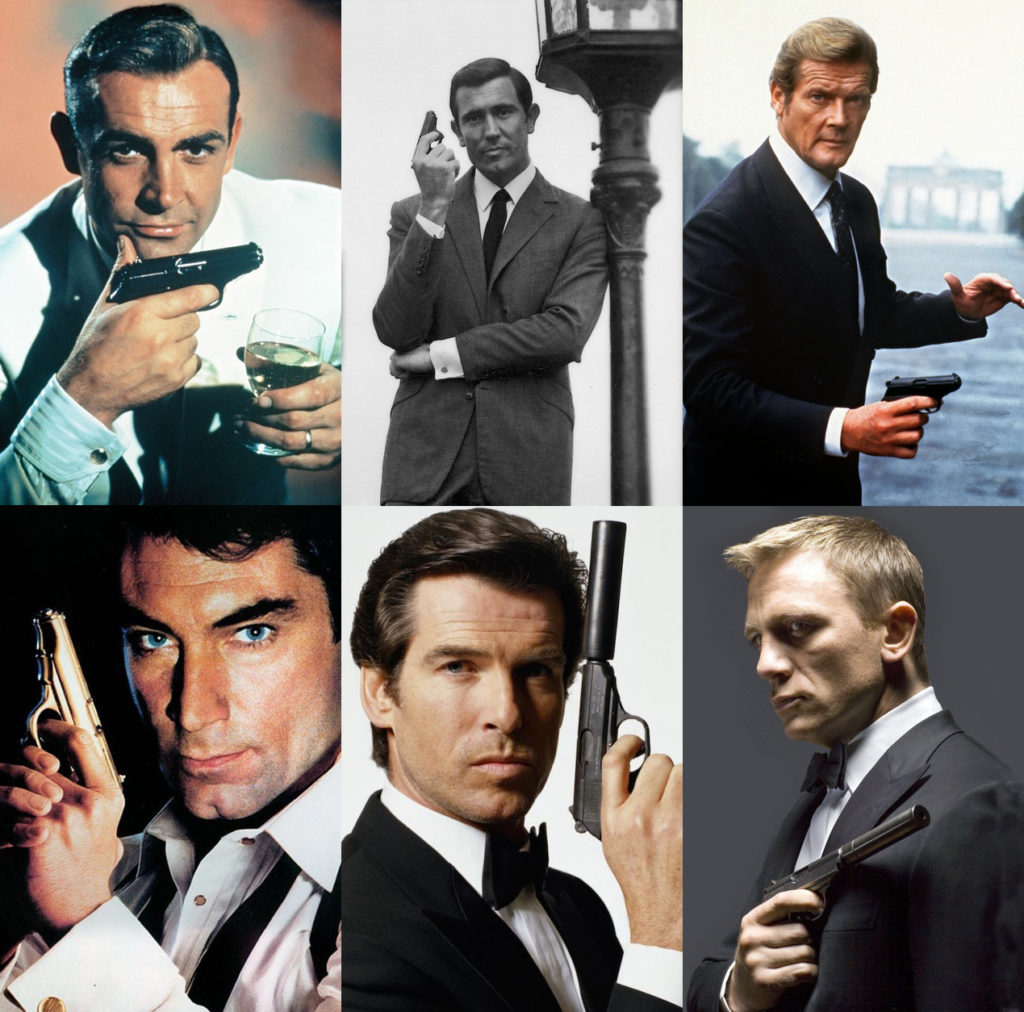 You know his name, and you also know his signature sidearm.
Of all the famous movie guns, the Walther PPK, and its association with 007, must be the most recognizable of all.

It has also been the longest running relationship between co-stars, as the first James Bond movie, ‘Dr. No’, came out in 1962.
Six actors, 54 years, and 26 movies later, the franchise is still going strong. This excludes the original Ian Fleming novels, the first of which was published in 1953 … but this is an article about ‘movie guns’, after all.

For James Bond aficionados questioning my movie maths, my list includes ‘Casino Royale’ (the 1967 version, starring David Niven), and ‘Never Say Never Again’ (the ‘Thunderball’ remake of 1983), two movies that usually don’t fall into the mainstream 007 filmography, but which are Bond movies nonetheless.

The story of the Walther PPK is interesting due to its use by the German military in the Second World War, followed by its complete switch in reputation and popularity as a world-famous movie icon, by its association with a ‘British’ secret agent.

In reality, the Walther PPK has always been an extremely successful firearm from its initial introduction, and never really relied on its association with a fictional spy in order to achieve this recognition. That being said, being the firearm of choice for the famous MI5 agent certainly propelled the gun to a level of popularity and recognition its creators could never have dreamed of achieving.

As many of you may already know, the Walther PPK was based on the earlier model Walther PP first introduced in 1929.
The ‘PP’ stands for Polizei Pistole (Police Pistol), as this was the firearm’s intended market from the outset.

In this regard, it was an immediate commercial success, and was adopted by the German and other European police forces.
It was also selected as the standard service pistol of the Luftwaffe. 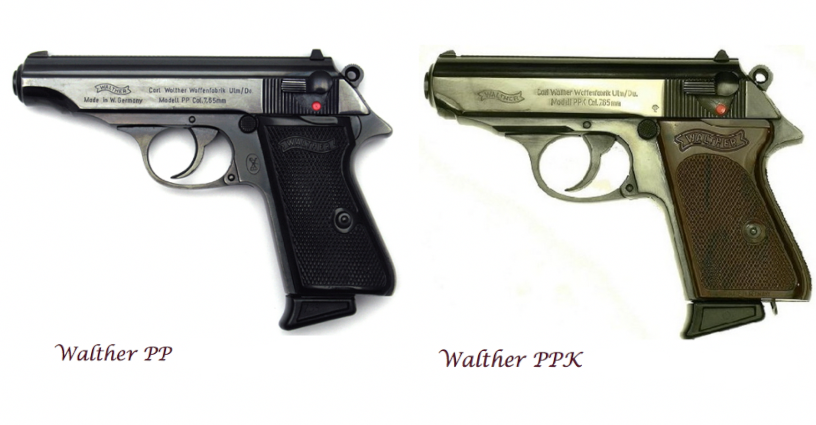 The initial Walther PP was an extremely innovative pistol for its time. Apart from its beautifully sleek, compact, and ergonomic design, its outstanding feature was that it was the first successful automatic pistol to incorporate a double-action firing mechanism.

This, as well as other pioneering features such as a firing-pin block safety (a standard feature of today’s modern pistols), combined hammer drop and manual safety lever, and loaded chamber indicator, made it the safest semi-automatic pistol of its time.
It must have seemed downright space-aged compared to other pistols of that era. 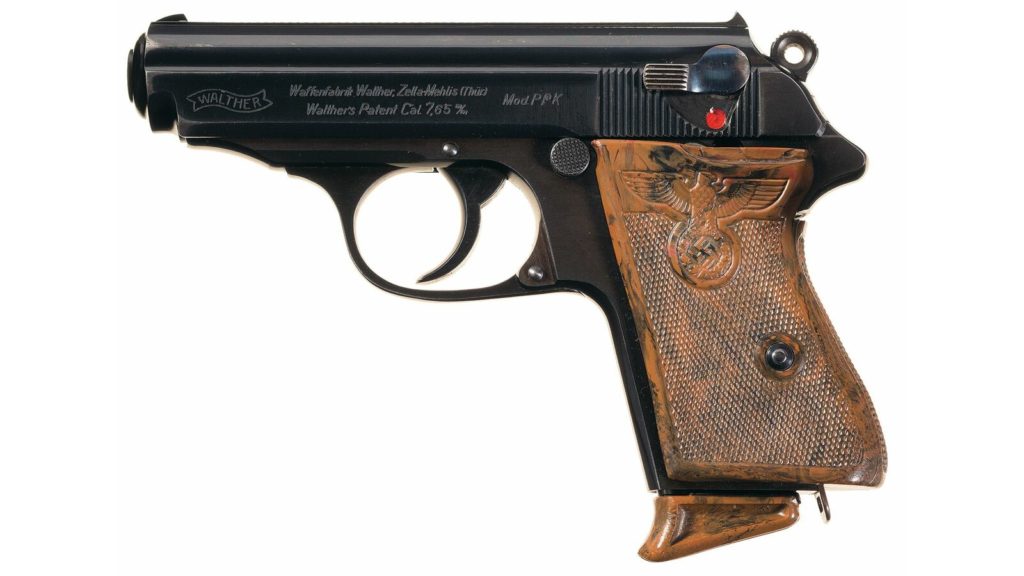 The Walther PP was soon followed by the PPK, or Pistole Polizei Kriminal (Criminal Police Pistol), a slightly smaller version for under-cover and plainclothes police officers. It had the same acceptance by and success with police and military forces as its predecessor.

During the war, the PPK was reserved for use by high-ranking officers and elite military officials, including the Führer himself, who eventually used his own PPK to voluntarily depart the planet.

Left: A Walther PPK Party Leader pistol, reserved for use by high-ranking Nazi officers and elite military officials during WWII

Both pistols were first designed to fire 7.65 mm (.32 ACP) cartridges, a common pistol cartridge of the time, and reasonably powerful, especially for a compact, direct blow-back pistol. Later they would also become available in other calibres, including .22 and 9mmK, but the PPK is most famous in its original calibre, mainly due to James Bond.

The PPK is first introduced to James Bond in the movie ‘Dr. No’ in fantastically droll, British style when the MI5 armourer presents
the new pistol to him with the great line: “Walther PPK, 7.65 mm, with a delivery like a brick through a plate-glass window. The American CIA swear by them”.

‘Brick through a window’ might be a slight exaggeration for the little 7.65 mm round, but it certainly beats the .25 ACP Beretta it was replacing.

Right: Bond, played by actor Sean Connery, receives his MI5 issed Walther PPK for the first time, in a scene from the movie ‘Dr No’ 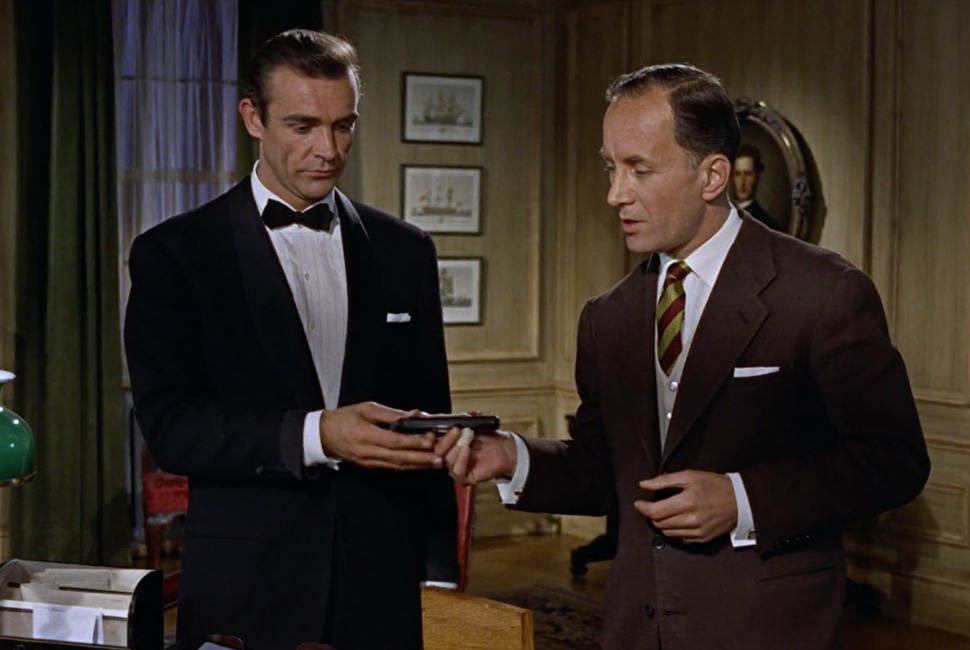 The story behind the decision to equip 007 with the Walther PPK is a fantastic piece of James Bond trivia.
In the first four James Bond novels, author Ian Fleming originally armed the hero with a Beretta M418 chambered in .25 ACP, based mainly on its compact size and concealability.
He wrote that Bond preferred to carry this pistol in a soft, chamois shoulder holster since it didn’t ruin his jacket line, an important consideration for the impeccably dressed agent.

This was all well and good until a firearm enthusiast and avid fan of the books wrote the author a letter in which he expressed his fondness for the James Bond character, but politely criticized his choice of weapon and holster, pointing out that the .25 calibre pistol was too under-powered for “… a man who comes into contact with all sorts of formidable people …” He also commented that a soft, chamois holster would catch on the pistol, and make it difficult to draw quickly.

The fan went so far as to suggest that Bond would be better off carrying a more powerful .38 Special snub-nosed revolver like a Smith & Wesson Centennial Airweight with a concealed hammer, combined with the sturdier and faster-drawing Berns Martin shoulder holster.
Ian Fleming was so impressed by the letter writer and his practical suggestions that he decided to take the advice and rearm his fictional main character.

He replied to the fan, thanking him for his support and helpful insights, stating: “You have entirely convinced me …”
However, he also mentioned that he felt that Bond should really carry an automatic pistol instead of a revolver (although he did write a revolver into his later novels as Bond’s alternative firearm when the situation or opportunity called for it), and asked the fan if he could recommend a more suitable replacement for the Beretta.
You don’t have to be a super-spy to deduce that the Walther PPK was the forthcoming suggestion … the rest, as they say, is history.

True to his word, in his next James Bond novel, ‘From Russia With Love’, Bond’s silenced Beretta M418 gets snagged in his favourite soft chamois holster at a critical moment, causing him to get stabbed by his assailant, and resulting in him being hospitalised for six months.

This, in turn, leads to the scene at the beginning of the next Bond novel, ‘Dr. No’, where M instructs 007 that he will be using a new firearm from now on, a scene which is reprised almost verbatim in the first James Bond film.

As a sign of appreciation and thanks to the letter writer who instigated Bond’s upgrade in weaponry, Ian Fleming created a new character in this novel named after the fan.
Fittingly, this new character was MI5’s armourer and equipment master, who presents Bond with his new Walther PPK.
Named Major Boothroyd, he would later become known simply as Q. 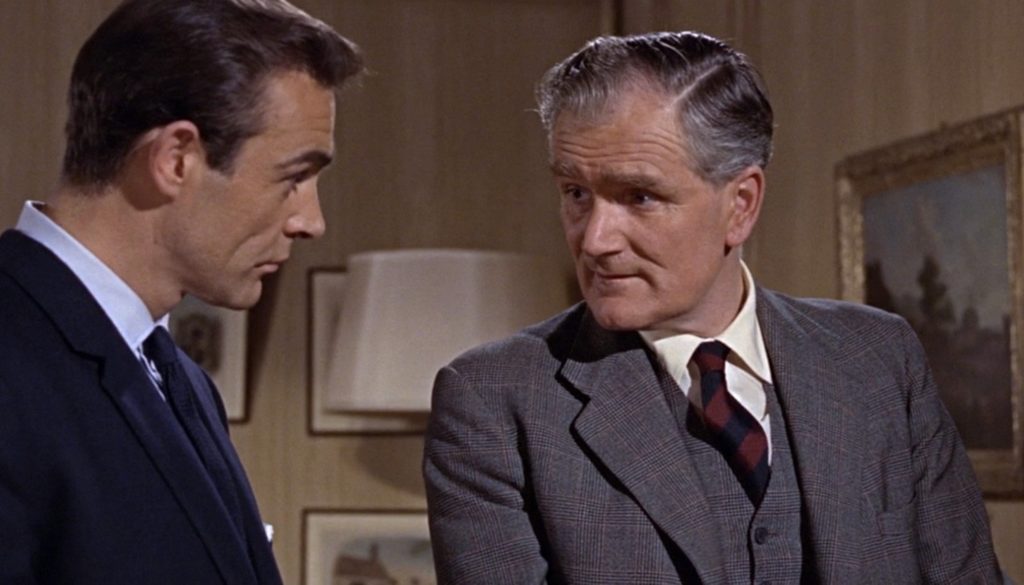 Above: “Really, 007!” Major Boothroyd, or simply, Q, originally and most famously played by Desmond Llewelyn

Getting back to movies, it’s interesting to note that, in ‘Dr. No’, an actual Walther PPK wasn’t even used, but rather the larger Walther PP, chambered in 9mmK. In another scene where Bond uses a silencer to quietly dispatch a bad guy, the pistol he uses isn’t even a Walther, but rather a FN Model 1910.

It is assumed that this firearm was supposed to pass unnoticed as the Walther, and was only used in the scene as the props department could not find a suppressor that fitted onto the PP.
In the end, they resorted to making a fake suppressor held in place via a dowel that simply slipped into the pistol’s barrel (as can be seen by Bond’s twist-and-yank motion as he removes the suppressor. A real suppressor would always be screwed onto the end of a barrel). 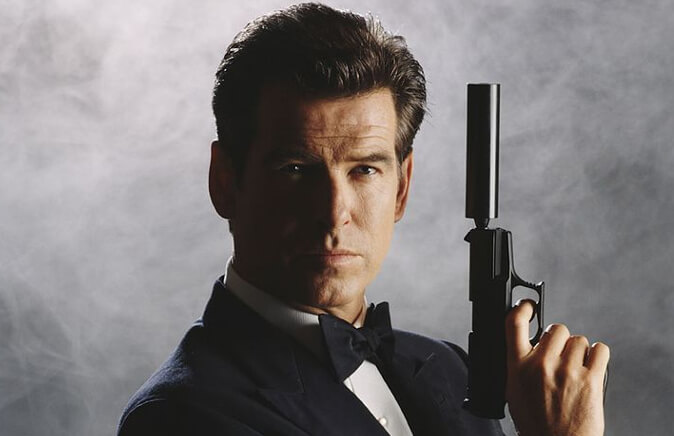 In subsequent Bond films, a real Walther PPK prop gun was used, and is carried loyally by the hero as his main firearm through all of his adventures, right up until 1999 when in ‘The World Is Not Enough’ it is replaced finally by the pistol’s modern descendent, the Walther P99, to better suit the movie’s modern setting.

Left: Pierce Brosnan, the fifth actor to play James Bond from 1994 to 2005, posing with the more modern Walther P99

However, in the latest Bond films, starring Daniel Craig, the famous secret agent once again carries his signature Walther PPK as his main weapon of choice, perhaps in an attempt by these newer movies to instill a stronger link to the tougher, grittier James Bond character portrayed in the original Ian Fleming novels, or simply for purely sentimental reasons.

Whatever the reason, it is great to see the iconic little pistol back in action, and it just goes to confirm the Walter PPK’s legendary status in the cinematic world.

Right: James Bond receives his new Walther PPK/S chambered in 9mmK in a scene from ‘Skyfall’ 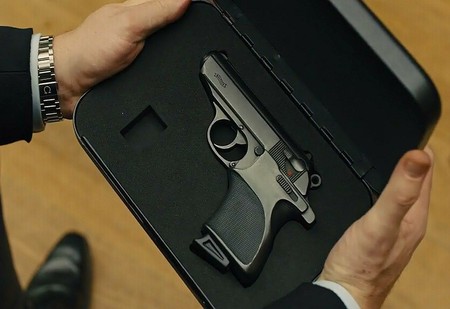 Look out for the next article in this series, 'A Gun for the Heros', featuring the Beretta 92 FS, coming soon.