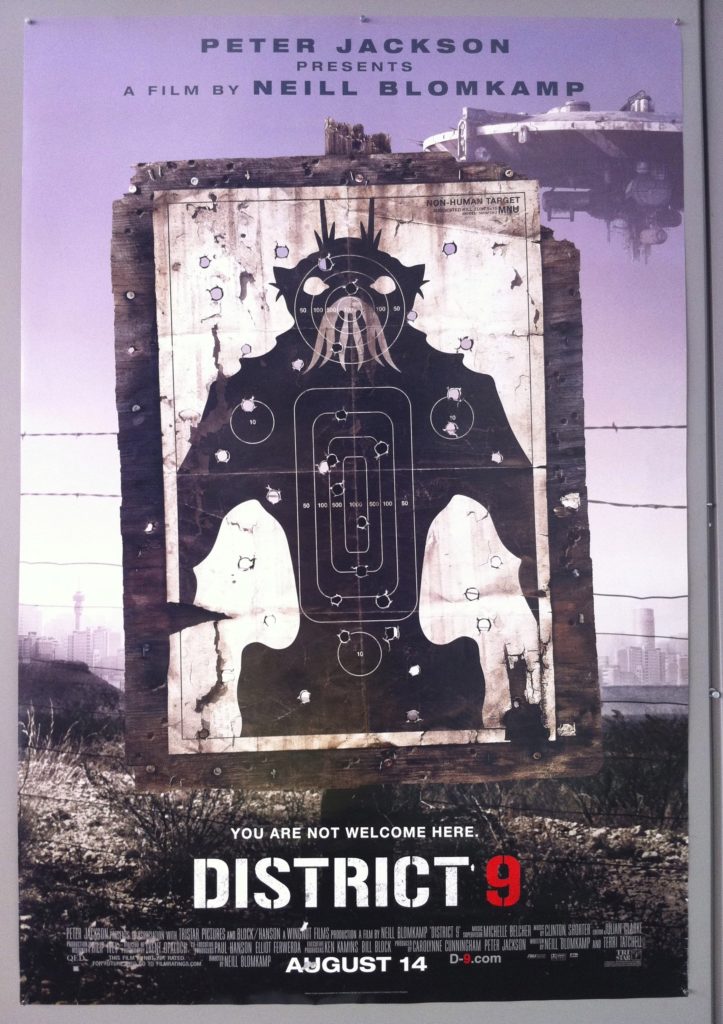 Above: The poster for the Neill Blomkamp blockbuster ‘District 9’, which showcases many South African made firearms

I’ve always enjoyed seeing South African-made firearms in movies and television shows, especially Hollywood or international productions.
It always gives me a feeling of pride and even slight patriotism, even though I have no commercial ties to the local firearms industry.
I guess it’s simply the same as supporting your home team and the gratification of showcasing your country’s accomplishments to the rest of the world.

What adds to this sense of pride is the fact that South Africa is a relatively small country compared to those of other large firearm producers, and our firearm industry is miniscule in turn. Yet over the past few decades we have managed to come up with some really interesting and innovative firearm designs that have been noticed in the global arena.

Unfortunately, unless adopted by the national defence or police forces, many of them have only achieved (at best) moderate commercial success by international standards, with relatively short production runs.
To be fair, the firearm industry is highly competitive and notoriously difficult to crack, so to simply attempt to launch a new firearm is an achievement in itself.

As far as recognition and reputation go, South African firearms have always scored very high due to their technological innovation and novel designs, not to mention generally high quality of manufacturing.
These are the factors that filmmakers look for in a firearm.
Just as it is if with stars, you need that ‘X factor’ to stand out from the crowd if you want to make it in Hollywood.

With an average of 600 movies produced in Hollywood every year, and around 2 500 worldwide (excluding television shows), filmmakers need to do whatever they can to help their productions stand out. This includes sourcing unique, ‘cool-looking’ firearms, particularly for the popular and growing science fiction genre. Having a firearm that isn’t widely distributed actually helps in this case, as it is easier to pass it off as being from another world, or from the future, if it is not very recognisable.

Unusual designs are not the only way that firearms are selected for use in the entertainment industry.
In most instances, it is simply a case of logistics and utilising what’s available from the local prop houses when filming on location, and these are likely to stock locally-manufactured and available weapons. Therefore, the more movies and TV shows that get filmed locally, the more likely we are to see South African weapons on screen.

Of course, the filming location alone doesn’t determine what firearms get used in movies, as they need to suit the context of the story. Provided they match the movie’s setting, what you will often end up seeing are local alternative firearms used by background or non-central characters, like policemen carrying Z88s instead of Beretta 92FSs, soldiers or mercenaries wielding R4s, R5s and R1s instead of AKs or M4s, and gangsters brandishing BXPs and Kommandos instead of Uzis or Mac-10s.

Sometimes local firearms will be modified to resemble required ones. Vektor R4s and R5s are often mocked-up to resemble AK-type rifles, as in the 2011 Gerard Butler film ‘Machine Gun Preacher’.
But these aren’t the firearms that jump out at as home-grown heroes when we see them on screen.

While perhaps not considered famous movie guns, there are a few South African firearms that are instantly recognisable by audiences around the world, and these local stars deserve some attention.

Above: An R5 mocked up to look like a Norinco Type 56C in ‘Machine Gun Preacher’ 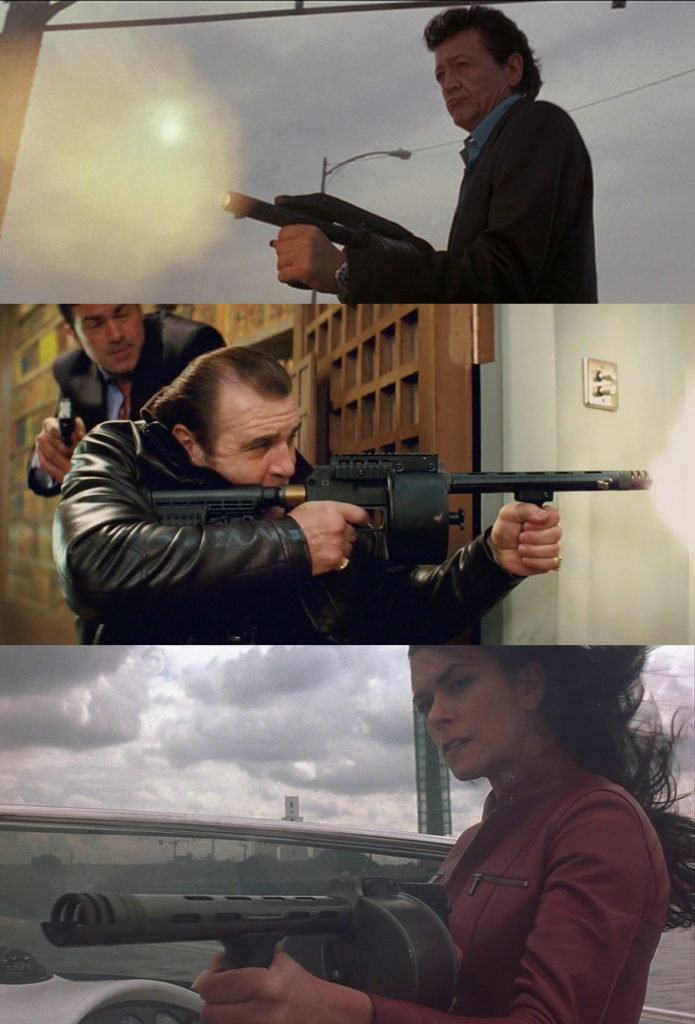 Above: Movie bad-guys just love the Striker and Protecta.
From top to bottom, ‘The Punisher’, ‘Kick-Ass’ and ‘The World is Not Enough’

Perhaps our earliest large-calibre celebrity was the Armsel Striker semi-automatic shotgun.
Developed in the late 1970s and early 1980s, it was a truly unique design, incorporating a rotating cylinder similar to that of a traditional revolver, and capable of holding 12 rounds of 12 gauge ammunition – a substantially high capacity for a shotgun for the time.

The cylinder rotated by means of a wind-up mechanism that pre-energised a spring that assisted its movement. It used a double-action trigger that would unlock the cylinder, and allow it to rotate with the release of each trigger pull. Made from pressed metal sheeting and hard polymer, including a folding stock, ventilated barrel jacket, pistol grip, and front vertical grip, and finished all in black, the appearance of this shotgun was, if you will forgive the obvious pun, striking.

The Striker was well-received initially by the market due to its high magazine capacity, rapid rate of fire, and short overall length, but it also had some significant drawbacks. The biggest issue was the drum magazine, which was non-detachable, making loading and unloading slow and cumbersome. Each empty case had to be manually poked out of the cylinder by a rod along the barrel, in much the same way as with a single-action Army revolver.

The design was later modified by replacing the spring-wound mechanism with a manually-operated loading system. This new model, the Protecta, rotated the cylinder by cocking the foregrip to the side.

The redesign also included an auto-ejection system to speed up unloading and loading. However, the last spent cartridge must still be removed manually with the ejector rod.

The combination of unique design and aggressive looks have made the Striker and Protecta Hollywood favourites, with both featuring in many films, television shows, and video games.

One of the earliest appearances of the Striker is in 1987’s ‘American Ninja 2: The Confrontation’, filmed right here in Simon’s Town, with ninjas doing back-flips from the rocks of Boulders Beach, while Michael Dudikoff tries to save the life and win the heart of Isidingo’s Michelle Botes. (Wait, what?!)
More recent appearances of the Protecta include the 2010 action-comedy ‘Kick-Ass’, and the wildly popular video game ‘Grand Theft Auto V’.

A factor which most likely helped with these shotguns’ popularity and recognisability is that they were also later manufactured in the USA as the Sentinel Arms Striker-12 and the Cowbray SWD Streetsweeper, increasing their distribution and utilisation in both the market and the entertainment industry.
Even so, these guns were born and bred in South Africa and, for better or worse, are remembered that way.

Right: An Armsel Protecta (left) and Striker (right) standing side by side.
The easiest way to quickly identify these two, similar looking shotguns is by the wind-up key on the front of the ammo drum/cylinder of the Striker, or by the large, rectangular case-deflector at the back of the drum/cylinder of the Protecta. 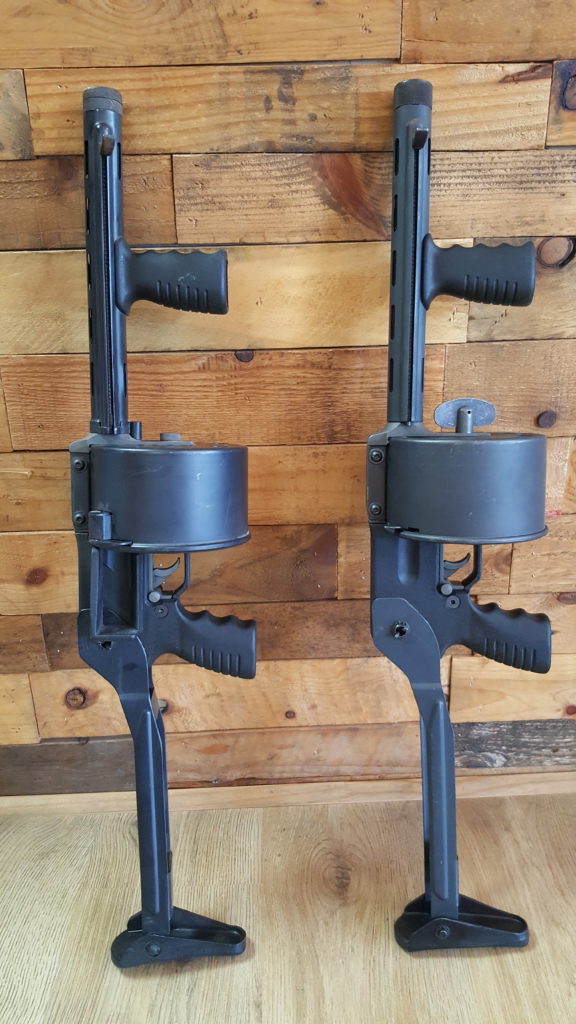 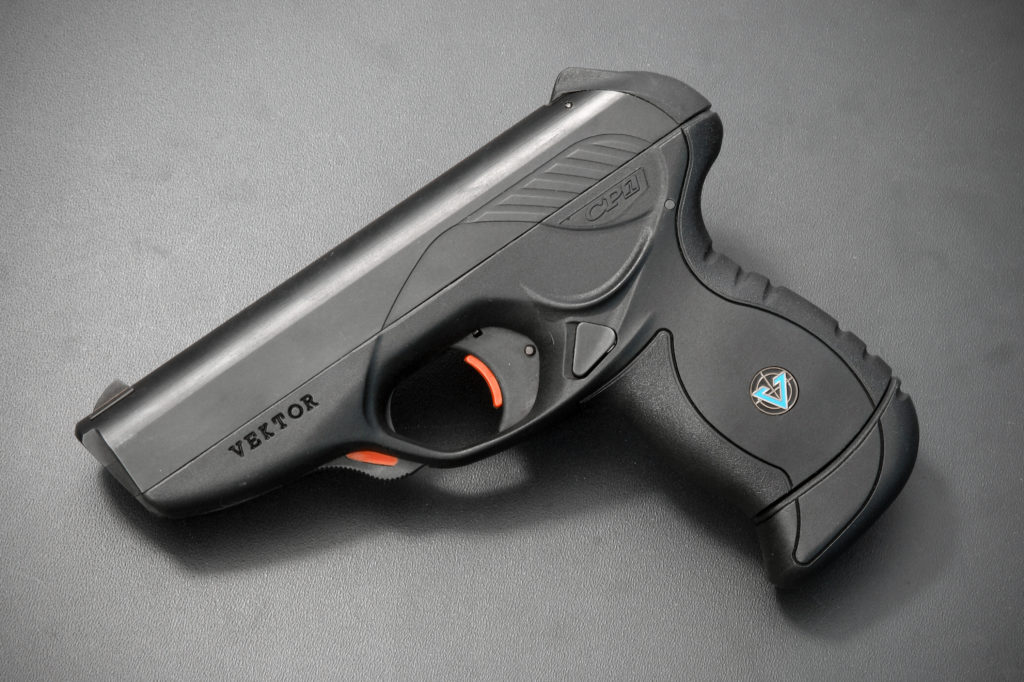 The creators of the Vektor CP1 pistol must have had Hollywood in mind when they came up with its, frankly, ‘space age’ design.
Despite being developed in 1996, today it still looks more at home on the bridge of the Starship Enterprise than in real-life use.

It was intended as a lightweight, concealed carry pistol for police service and self-defence. While meeting the criteria of being streamlined and snag-free, design company Pentagraph came up with something unconventionally modern and sleek.

It was one of South Africa’s first handguns to feature a polymer frame, adding to its advanced appeal.

It also incorporated a unique and novel safety lever built into the front of the trigger guard, as well as a trigger safety, standard in many of today’s pistols, but cutting-edge for the time. Combined with its rounded, flowing, almost organic looking lines, this pistol was a true head-turner.

Commercially, initially it proved very popular, becoming one of Lyttelton Engineering Works’ (LEW, later Vektor) highest sellers, with many exported to the USA.
Unfortunately, a potential safety issue that resulted in a total product recall and upgrade entirely at LEW’s cost damaged the pistol’s reputation irrevocably, and ultimately ended its sales and production.

From the beginning, the CP1 was destined to appear on screen, especially in science fiction, with its first performance in the same year of its conception, in the 1996 movie ‘Space Truckers’.

It really dominated the television scene, appearing in many popular and long running sci-fi series, including ‘Firefly’, ‘Dark Angel’, ‘Battlestar Galactica’, ‘Stargate SG-1’, ‘Fringe’, and recently ‘Continuum’.
LEW may have struck out when it came to the CP1’s commercial success, but it hit a home run in producing a timeless movie gun. 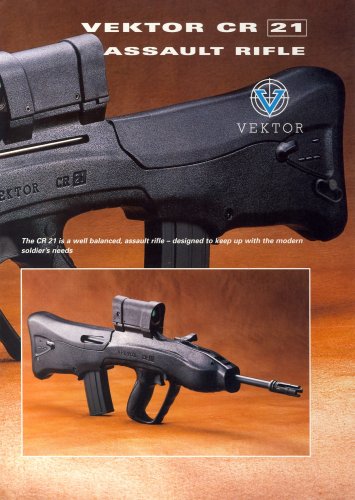 While not appearing in as many films and television shows as some other South African firearms, the CR-21 is easily our most recognised movie gun. This is entirely due to its prominent use in one of the biggest science fiction block-busters of recent times, the 2009 hit ‘District 9’.

The CR-21 was an experimental bullpup assault rifle derived from the receiver, action, and barrel of a Vektor R4. It was intended to become the new standard infantry rifle for the SANDF, by proposing it as an upgrade project for all the R4s in service. It was evaluated favourably by the SANDF and SAPS, but ultimately not adopted due to budgetary constraints.

Only 200 complete rifles were produced, while components for another 200 were manufactured and later sold to Nobleteq, for assembly into semi-auto only versions for the commercial market, making this a fairly rare firearm for prop use.

Left: A page from a promotional product brochure for the Vektor CR-21

You would be forgiven for thinking the CR-21 was the biological Big Brother of the CP1 pistol, since the same company designed both firearm bodies, and they share definite similar aesthetic traits. And, as with the CP1, it seems like they intended sending it into space rather than into the bushveld or urban combat.

The waving, organic lines of the black, polymer body enhance the already unconventional bullpup design, leaving many people on the fence as to whether it looks futuristic and cool, or something only a mother could love. But Hollywood saw the swan in this ugly duckling, and its potential as a great screen gun.

The planets really aligned for the CR-21 with ‘District 9’, being a big budget Hollywood production, a suitable science fiction story, filmed in Johannesburg, and directed by South African Neill Blomkamp, who seemed intent on showing off every local firearm ever made.

The prop rifles, wielded by Multi-National United (MNU) soldiers, have shortened barrels, are equipped with aftermarket optical sights and side-mounted weapon lights and lasers, and most notably are painted half white, giving them a striking two-tone appearance. 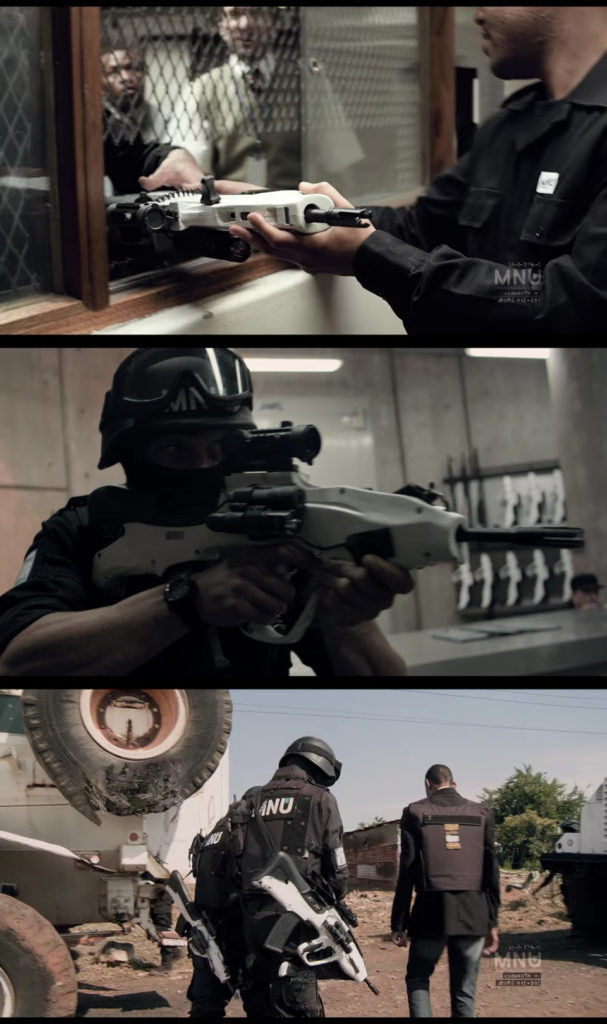 It has been used in other decent science fiction titles like ‘Doomsday’, ‘Dredd’, and even the anime series ‘Ghost in the Shell Stand Alone Complex’, but for most fans it will always be remembered as the white rifle from ‘District 9’ used to shoot those “F****N PRAWNS!”

Look out for the next article in this series, 'Firearms of the Fantastic', coming soon.