Pistol or Revolver for Self-Defense? 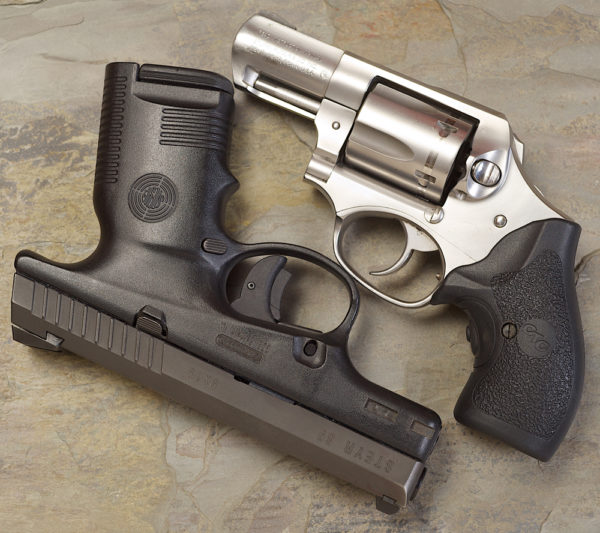 Which type of handgun is more suitable or preferential for self-defense; pistol or revolver?

This argument has raged for many years and will continue long after you and I are gone.

In the end there is no, one, right answer as it comes down to individual circumstances and personal preference.
There are some fundamental points that you can consider however when weighing up the choice for yourself.

Both types of firearms have advantages and disadvantages, with some of the main ones listed below:

REVOLVER PROS:
– They are very simple to operate, so less can go wrong for an inexperienced user.
– They generally tend to use more powerful ammunition than pistols, which is good for penetration and stopping power.
– Most (modern) revolvers are double action, meaning that if you have a misfire, you can simply pull the trigger and the next round will be loaded and fired.

REVOLVER CONS:
– They have relatively low ammunition capacities, generally 5 or 6 rounds, but sometimes up to 8.
– They generally have slightly more recoil than pistols, due to their common, relatively powerful calibers (e.g. .38 Special and .357 Magnum) and fundamental design.
– Revolvers fired in double-action have heavy trigger pulls, making them harder to fire fast and accurately. They can be manually cocked for an easier trigger pull, but this results in slower rate of fire.

PISTOL CONS:
– Pistols have more moving parts and controls and are therefore more complicated for an inexperienced user.
– If a pistol has a misfire, it needs to be manually cycled to load a new round before it can be fired again.

These are two of the more important points to consider when thinking about revolvers and pistols. 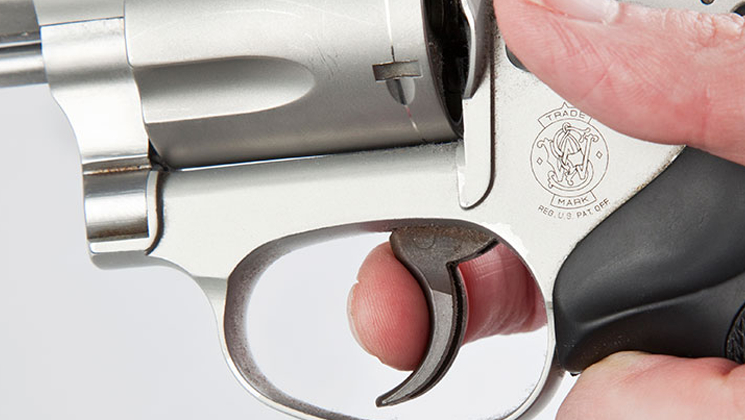 TRIGGER-PULL
Revolvers operate with what’s called a double-action mechanism. This means that pulling the trigger first cocks and then also releases the hammer. This type of action gives it a relatively long and heavy trigger-pull.

On most revolvers you can also manually cock the hammer with your thumb, so that when you pull the trigger, it simply releases. This is called single-action and doing this greatly lightens and shortens the trigger-pull.

Even though it is possible to shoot a revolver in single-action this is generally only done for long distance shots without much time pressure.
For self-defense applications, it is recommend that you always train and shoot a revolver in double action since this is the faster method of firing.

Most semi-automatic pistols operate with single-action mechanisms, meaning that they generally have lighter and shorter trigger pulls than revolvers, making them easier to shoot fast and accurately.

Bearing this information in mind, it is important to remember that in the end, practice and training is the key.
No matter what the firearm and trigger, if you put in the time and effort, you will be able to make it work for you and achieve the accuracy and performance you desire.

AMMUNITION CAPACITY
This is perhaps the biggest differentiator between revolvers and pistols.
Simply put, more ammunition means more chances to hit your target and therefore a greater chance of success.
One might argue that this greater capacity comes at the expense of smaller, less powerful rounds.
However from early on the consensus seemed to be that more opportunities to put shots on a target is more desirable than the power of those shots.

This is why military and police forces around the world all transitioned from revolvers to semi-automatics pistols as official sidearms as soon as reliable models became available.

This point was hit home even further when the United States Army moved from the 7 round M1911A1 in .45 ACP to the 15 round Beretta M9 in 9mmP in the early eighties.
In recent years the FBI has also changed from .40 S&W pistols to 9mmP pistols, as they concluded that advancements in ammunition technology have resulted in 9mmP rounds with the same ballistic performance as the larger and heavier recoiling .40 S&W.

However, in the United States of America there are still many people who use revolvers as their main, everyday carry firearms.
This is due to the national statistic that in all shooting incidents throughout the USA, an average of only 2 shots are fired, meaning that a 6 round revolver is more than adequate and still a viable self-defense option.

This statistic may not apply in this country, but it illustrates that different types of firearms can be suitable for different applications and circumstances, and you must consider just what these are when making your decision.

Below are a few myths and misnomers regarding pistols and revolvers that people usually also, incorrectly include in this argument and are important to note. 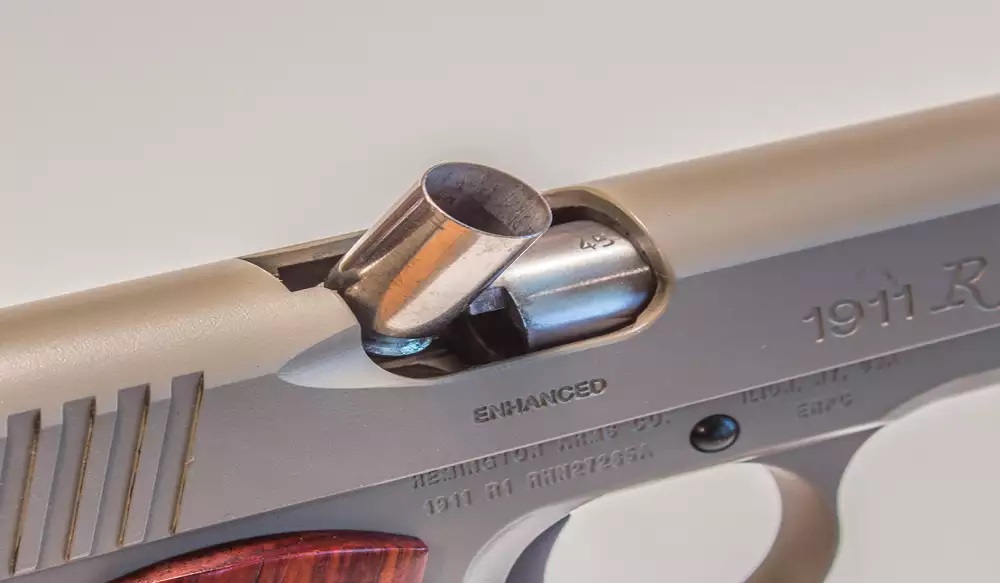 RELIABILITY
People often state that revolvers are more reliable, i.e. less likely to malfunction, than pistols.
This may have been the case in the early days of the first semi-automatic pistols, since at that time revolver design was already well understood and established.

But pistol design and reliability quickly caught up and today there has been over 100 years of semi-automatic pistol development.

While it is true that revolvers have less moving parts and controls than pistols and therefore fundamentally have less that can go wrong with them, actual reliability is more a factor of manufacturing quality, firearm maintenance and ammunition. 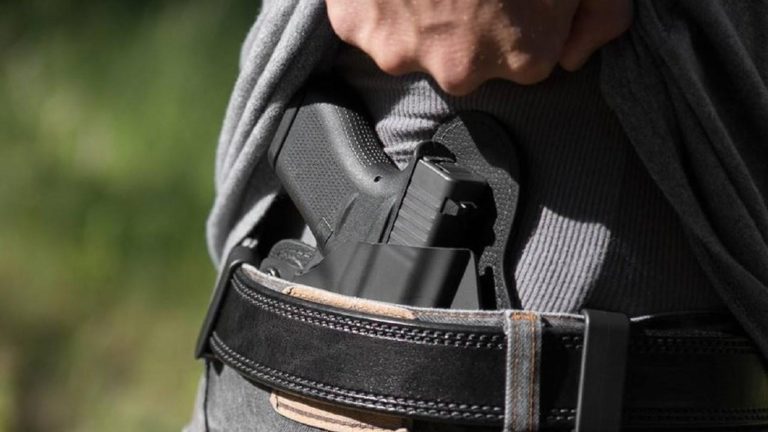 CONCEALABILTY
One might argue that one type of handgun is more concealable or lighter than the another, but there are so many different models of revolvers and pistols made from all kinds of weight-saving materials these days, that one could easily find a concealable option in both categories.

Body type and size as well as where the firearm will be carried also influence the decision. 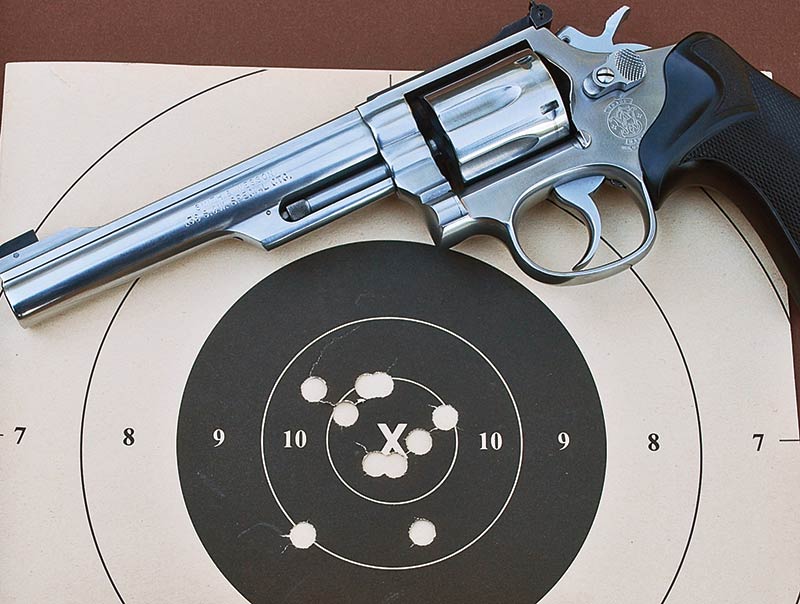 ACCURACY
One might argue that revolvers are intrinsically more accurate than pistols since they have fixed barrels as apposed to tilting ones*.
You may also hear similar arguments regarding the lengths of barrels, i.e. longer barrels having greater accuracy.

Quite frankly these minor differences in accuracy are inconsequential in the application of self defense as most engagements occur over very short ranges, and often with point shooting rather than actual aiming.
Real accuracy comes down to training and time at the range.

*Some, mostly older model semi-automatic pistols with fixed barrels do exist, however most modern pistols use tilting or revolving barrels.

SNUB-NOSE REVOLVERS FOR WOMEN
Chances are you have been advised, or possibly even reasoned to yourself, that a snub-nose revolver chambered in .38 Special is the perfect self-defense handgun for a woman to carry, due to its small, concealable size, simple operation and powerful cartridge.

Snub-nose revolvers or “snubbies” are actually extremely challenging to shoot accurately. Their small size and light weight makes the significant recoil from the powerful .38 Special cartridge very difficult to control, especially for fast follow up shots.
Most snub-nose revolvers only have a 5 round capacity, meaning that you have less margin for error when it comes to shot placement.

Therefore, unless you are prepared to put significant time and effort into training with your snubby in order to become proficient with it, I would rather recommend a more manageable semi-automatic pistol in a smaller caliber (9mmK or 9mmP), with a higher round capacity, more comfortable grip and better sights.
In fact, even a heavier, larger frame revolver would be a better option for woman than a snubby.